Gail Brodie the founder of The Challenge Games, her story.

I humbly but proudly accept the title of founder of the Challenge Games, but it would be honest of me to say that I did not consciously ‘set out’ to “create”  the event. It is something that “happened” to me – or snuck up on me, you might say, as do most things in life It began in 1994.

My employment at that time was as the Business Services Manager at our local special education school. That in itself is rather ironic – just another unplanned circumstance that directed my life’s path into the world of disability.

The principal of our school  – knowing of my ‘other life’ as a qualified Athletics Australia Track & Field official and my involvement in the sport at local, national and international levels –  very bravely put up his hand to take on the challenge of accepting  North Queensland’s turn to host  what was known then as the Queensland Country Special Schools’ Athletics Carnival, an event for students attending special schools outside the metropolitan area of Brisbane.

So we did that and in comparison to the Challenge Games of today, it was only a “tiny weeny” one, with just over 20 schools and 250 students attending.

It was something extremely new for our students and their teachers.  The feedback, thank you letters and accolades were overwhelming and it wasn’t long before requests for  – “please we need to /  we want to have this again next year” –  began arriving.

And so the ‘games were on’ again the following year and are as strong and as exciting  over 20 years later.

By gradually inviting neighbouring education district schools and the independent schools  –  and adding new fun events along the way –  each year became a new record in numbers of students and schools attending, from the original 250 to this years’ new record of approx 1000 students.

By about its 9th year it was evident because of the huge increase in the numbers of students and schools participating,   that a committee was needed to help me with the workload. It quickly attracted a group of interested staff from the local special education facilities in Townsville to help me carry on.

We now have a very dedicated and passionate team of teachers and community members on our organising committee  –  with a few of them still there with me for the long haul since the committee formed in 2003. Its future is bright and positive with this great bunch of people

We will be celebrating the 24th Anniversary this  year – which is very exciting – and I am especially proud that the Challenge Games have evolved into the very unique event that it has .

We do know that the event has been copied a little further south in the state and that is great –  but we believe that it is the only event of its uniqueness and size in Australia and we are yet to be –    “challenged”  – about that.

The event has received many awards from within the community, local government, disability services area and Education Queensland.

The reward of seeing how much the students love and enjoy the games and the positive feedback coming from our teachers, parents and the community ,  has given us many warm fuzzies, much laughter and many stories to tell.    All this far outweighs the hard work and time given in making it happen.

The success of the Games is very dependent on volunteers – a little under 100 willing bodies is the approximate number of workers required  each day ,  and they come from many and varied corners of our Townsville community.

Teachers do accompany their school groups, but their day is full with the responsibility of tending to the  supervision and needs of the students,  and the valuable contribution of our volunteers over these two days gives teachers the freedom to enjoy the fun along with the students.

Our volunteers  roles are wide and varied.

They include : setting up tents, manning the stations, organising students, retrieving  frisbees and  shot puts, mark the landing spots, rake the long jump pits, organise the students on the track, start and judge  sprints and relays, give out ribbons, and pass around refreshments, be prepared to smile and laugh a lot, and very importantly  – be prepared for the unexpected.

Many of our volunteers are long term – some a few years now,  some for many, many years now,  and I have a special list of a few who have been with me since day one.

The involvement of our volunteers has truly made the carnival the success it is, without them we would be lost. It has also made the carnival the truly “inclusive”,  community event that it is.  They have made new friends themselves, and  I am sure will feel the personal benefits to be gained from their little glimpse into the world of disability . 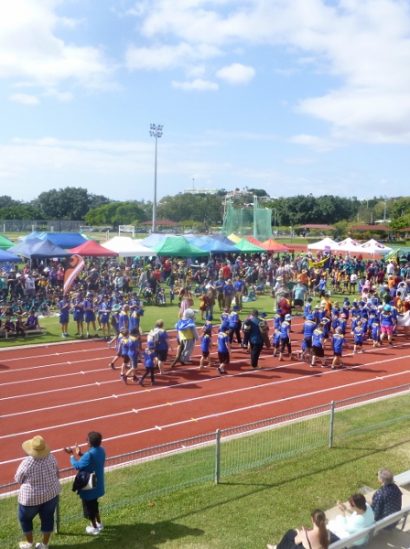